This information is provided for educational purposes only. The Town of Fairfield and the Fairfield Police Department expressly disclaim any and all liability resulting from the material and any recommendations provided and do not represent that these recommendations will prevent a crime or in the event of such crime limit damage to any person or property.

There has been an increase in reports of counterfeit money being circulated throughout Fairfield. According to law enforcement reports, this money has been passed at both retail establishments and through private transactions (i.e. rummage sales). Many times, these criminals will target businesses at peak hours, hoping that the employee will not look closely at the currency.

Below are some tips from the US Secret Service on how to detect Counterfeit Currency:

Look at the borders 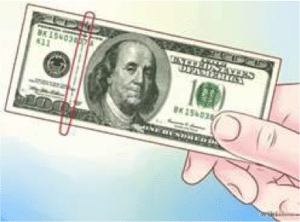